History has not always been kind to women in STEM (Science, Technology, Engineering and Mathematics).  Some women , like Marie Skłodowska-Curie and Rear Admiral Grace M. Hopper, were recognized for their phenomenal work during their lifetimes.  However, many women have passed long days and nights in noxious laboratories only to see the credit awarded to others. Many others have spent years gathering and compiling heaps of data only to see their work obscured by a famous mentor.

InspiredByMyMom.com has chosen to honor the following three women in STEM for Women’s History Month this year.

Nettie Maria Stevens was an early American geneticist and one of the first researchers to describe that an organism’s sex was dictated by its chromosomes rather than environmental or other factors.

Born in 1861 in Vermont, Nettie Stevens received her doctorate from Bryn Mawr College in Pennsylvania and continued at the college as a researcher studying sex determination. She was the first to recognize that females have two large sex chromosomes.

Nettie, unfortunately, fell victim to a phenomenon known as the Matilda Effect which is the repression or denial of the contributions of female researchers to science. Thomas Hunt Morgan, a prominent geneticist at the time, was credited with discovering the genetic basis for sex determination as he was the first to write a genetics textbook and Stevens’ name was not associated with the discovery.

Morgan was later credited with the Nobel Prize for Nettie’s hard work. To add insult to injury, he later posted an article in the journal Science saying that Stevens acted as more of a technician than an actual scientist throughout the whole experiment, though this was found to be quite untrue.

Her scientific career started late, and ended much too soon when she died of breast cancer on May 4, 1912. However, in her relatively short life, she had managed to contribute more to her field than many scientists have done with much longer careers.

Marie Skłodowska-Curie, who conducted pioneered research on radioactivity, was the first woman to win a Nobel Prize and the first person (and only woman) to win twice.  However how many are aware that her daughter Irène Joliot-Curie, jointly with her husband, was awarded the Nobel Prize for chemistry in 1935 for their discovery of artificial radioactivity.

Irène was born in Pars, in 1897, when her parents were making their discoveries.  Her whole life was dedicated to her studies though they were interrupted by World War I when she was sent to the countryside for safety.  After the war she returned to Paris and, as she neared the end of her doctorate in 1924, she also started teaching precise laboratory techniques required for radiochemical research where she met her future husband (& collaborator) Frédéric Joliot. In 1934, building on the work of her parents, they made the discovery that sealed their place in scientific history.

In 1956 Irène Joliot-Curie was admitted to the Curie hospital in Paris, where she died on 17 March at the age of 58 from leukemia which was brought on my years of exposure to radioactive materials.

Her legacy continues with her daughter Hélène Langevin-Joliot who is a nuclear physicist and professor at the University of Paris and her son, Pierre Joliot who is a biochemist at Centre National de la Recherche Scientifique. 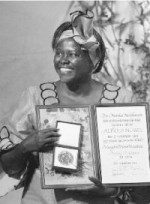 Wangari Muta Maathai was born in the village of Ihithe in the central highlands of the colony of Kenya on 1 April 1940. In addition to being the first woman in central or eastern Africa to hold a Ph.D., the first woman head of a university department in Kenya and the first African woman to win the Nobel Peace Prize in 2004, Wangari Maathai founded the Green Belt movement in Kenya in 1977.

She started her primary education at the age of eight and was able to pursue a higher education, a rarity for girls in rural areas of Kenya, when she was chosen for a special program to attend school in the United States as the end of East African colonialism was nearing. There she majored in biology and continued on to receive her M.Sc in biological sciences.

When she returned to Kenya, Wangari Maathai worked in veterinary medicine research at the University of Nairobi, and despite the skepticism and even opposition of the male students and faculty, was able to earn a Ph.D. Working her way up through the ranks, she became head of the veterinary medicine faculty, a first for a woman at any department at that university.

In 1977, she founded the Green Belt Movement, an environmental non-governmental organization focused on the planting of trees, environmental conservation, and women’s rights. Over the next decades Wangari Maathai became an environmental activist in Kenya where she campaigned against deforestation and was arrested numerous times by the government.

In 2002, she was elected to Parliament and named as Deputy Minister in the Ministry of Environment, Natural Resources and Wildlife in January 2003.  Professor Wangari Maathai succumbed to cancer in 2011 however her legacy, the Green Belt Movement, lives on.

If you enjoyed the HERstory of these women you may also like to read other stories in this series.

A blog about women and those who inspired them to be the best that they can be. @BettyEitner creator, blogger, editor
View all posts by Inspired by My Mom →
This entry was posted in Inspirational, Women and tagged #WomenInHistory, herstory, inspiration, Inspired by my mom, inspiring story, inspiring women, Irène Joliot-Curie, Nettie Stevens, STEM, Wangari Muta Maathai, women in herstory, women in history, women in STEM. Bookmark the permalink.