On The Radio, Actually on BlogTalkRadio

This coming Thursday, August 28th, 2014 at 5 pm, I am being given the extraordinary opportunity of talking to Winslow Eliot on WriteSpa’s BlogTalkRadio about InspiredByMyMom.com – how it came into being and why I thought it was so important to give a platform to stories about the women that inspired us so that they are never forgotten.

You can listen to the recorded interview here: Interview with Winslow Eliot on WriteSpa 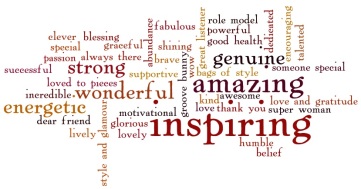 There are so many so-called “ordinary” women who have led extraordinary lives that need to be documented and shared with the world.  Few of them may have not even considered their lives special or different yet they provided strength, courage, guidance, love and inspiration to so many.

My own mother’s story “Remembering My Mom and Her Incredible Life” was a story that I was brought up with and it was the first I shared on this blog.  It was the fabric of my upbringing and it had a big influence on me but I never realized how much others were inspired by her life until it was pointed out to me.

My mom’s story has also given others the desire (or maybe even the need) to share those of their inspirations.  As Gertruda wrote “Giving Up Was Not An Option” she found it very comforting and cathartic putting her mom’s 90 year life into words. Dana took the opportunity of thanking her mother when she wrote “Just Doing What Needs To Be Done”.  Joni wrote her poem “I Thought She’d Live Forever” when her mom passed away several years ago but shared it with the world when the opportunity arose through this blog.  Amy Riolo wrote her Nonna’s story from the obituary she wanted to give at her grandmother’s funeral but couldn’t.

Winslow Eliot, who is providing me with this opportunity on BlogTalkRadio, had a great-grandmother that not only inspired her life but impacted America’s history by fighting for the right to vote for women.  Her story is told by Winslow in “The Lady of My Dreams: Ada Davenport Kendall“.

I know that there are so many more stories that need to be told and women that need to be heralded and remembered as the heroes they were and are.  I invite you to share HERstory with the world – she deserves it.

A blog about women and those who inspired them to be the best that they can be. @BettyEitner creator, blogger, editor
View all posts by Inspired by My Mom →
This entry was posted in Inspirational, Mother, Wife, Women and tagged Betty Eitner, BlogTalkRadio, herstory, inspiration, Inspired by my mom, inspiring story, Mentor, Mother, teacher, Winslow Eliot, WriteSpa. Bookmark the permalink.